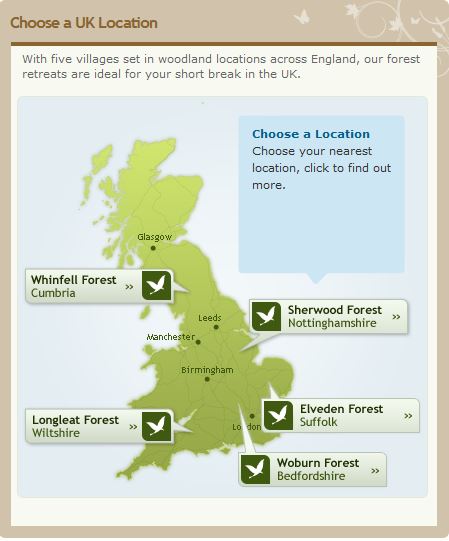 Fresh-faced families cycle through 362 acres of trees en route to their next activity or a sauna back at their eco forest home. There isn’t a car in sight, let alone an all-you-can-drink cocktail bar.

It’s yob purgatory. This is a holiday resort so wholesome and pine-scented it could have been designed by a team of EU inspectors - right down to its mis-spelt name.

But while the Dutch-born ‘Center Parcs’ concept might be a double affront to the English language, it is undeniably popular with the British.

We love it so much that the UK operation has just opened a brand new £250 million sylvan utopia a few miles down the M1 from that other well-known beauty spot, Milton Keynes.

The Woburn Forest complex, the fifth and smartest addition to the empire, does not open formally until next weekend. But the new site has been offering cut-price trial breaks ahead of schedule and we went to see what’s in store.

Like most first-timers, I had a vague notion that a Center Parc consists of an aquatic playground under a large dome.  And so it does. Actually, Woburn Forest does not have a proper dome. Rather, its huge, steamy centrepiece looks more like Heathrow’s Terminal 5.

My children would happily sell our home and live in this giant greenhouse for ever and ever - and said so many times.

Set around a central pool, which generates giant waves for five minutes every half an hour, it has a full span of watery slides and rides.

These range from drifting down a ‘Lazy River’ in a rubber ring to a speedier set of rapids which start indoors, meander outside and then return indoors.

More challenging are a trio of multi-storey sluices that will make you think twice before flushing away that poor  old spider ever again.

The worst of the lot is something called a Tornado, a  four-seat rubber ring which, at one point, disappears down a giant plughole.

After a while, you start to notice the details which perhaps explain why people keep coming back.

Whether it’s the changing rooms that seem to dry instantly or the silicon-chipped wristbands that unlock both your swimming locker and your front door (and let you run up a tab in the poolside cafe), it all just works.

Accommodation ranges from two-bed apartments to eight-bed houses and a hotel. Our ‘Executive’ lodge had an open family room-cum-kitchen and bedrooms, sauna, billiard room, barbecue terrace and Jacuzzi.

Beware: a top-end villa for eight people can cost more than £2,500 for a long weekend in August - but, again, the spec is top end. I was amazed to find we had six - yes six - televisions.

Food-wise, there are plenty of restaurants (Cafe Rouge, Strada et al) and a supermarket if you want to eat in.

Aside from swimming and cycling, all activities have to be paid for. They’re not exorbitant - £11.50 an hour on the indoor climbing wall or £4.75 for a child’s rollerskating lesson - but the list is so long it’s almost overbearing.

The best way to narrow it down is to look out the window and see if it’s raining. Then you can decide whether to despatch a child to archery, canoeing or two hours of ‘chocolate chefs’. A major surprise was the spa complex. We had expected a few exercise machines and a glass of carrot juice.

In fact, people spent all day in the ‘Aqua Sana’, which is several spas within a spa.
Each is themed - ‘Fire and Ice’, ‘Mineral & Gemstone’ and  so on.

The much-vaunted forest cycle routes seem a little overblown, though. You just cycle along the traffic-free roads connecting the 600-odd houses without ever actually entering what you might think of as a ‘forest’.

But with two novice cyclists and a toddler sitting happily in his bike trailer, we had quite enough ground to cover. Funnily enough, they only wanted to go in one direction - back to the pool.